Can we build a better long-term care program?

Unfortunately, the proposed program would cost a 65-year old about 85% more than what long-term care insurance costs today.  One of the proposed plans would pay for two years of benefits, after a 90-day Elimination Period. The plan would also include inflation protection. Without any government subsidies, the study estimated a 65-year old would have to pay $3,680 per year for this plan.

A 65-year old male, in average health, could get the same benefits today for only $1,541 per year.  That’s less than half of what the proposed program would cost.  Ironically, the study states that “relatively few people purchase private long-term care insurance because of high premiums.” Yet for all age groups the premiums proposed in this study would cost, on average, 87% more than long-term care insurance costs now. 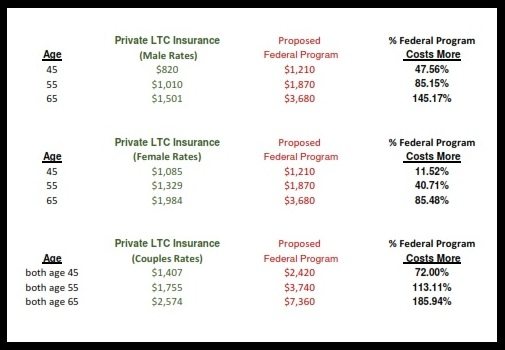 Fortunately, 43 states in cooperation with the federal government have already launched a “Public/Private” Partnership for Long-Term Care. To help the middle-class plan for long-term care these states have approved for purchase a special type of insurance called “Long-Term Care Partnership Policies”.

A government-approved Long-Term Care Partnership Policy can protect most, if not all, of your assets from Medicaid spend-down and Medicaid estate-recovery.  A married couple both age 61, in average health, could share a Long-Term Care Partnership Policy with $250,000 of benefits. Their premium would be less than $100 per month per spouse. If they used all $250,000 in the policy, they could apply for Medicaid benefits and protect $250,000 of their countable assets from Medicaid.

If the couple wants to protect more assets they can buy more benefits for a higher premium. If the couple has less assets they can buy less benefits for a lower premium. The middle-class can target how much coverage they need based upon how much of their assets they want to protect from Medicaid. In all cases, a lifetime of savings & hard work can be protected by a Long-Term Care Partnership Program. Click To TweetLong-Term Care Partnership Programs are the most equitable solution to the long-term care crisis. Click To Tweet

How Much Does It Cost?

Curious about how much long-term care insurance costs? Try our Instant Quote! No email required.